Power Supply Testing with a Ladder

While he didn't need it for climbing up to heaven and stuff, I borrowed it! Generous chap Jacob!

A spark can jump between two conductors which, relative to each other, carry a high voltage. The gases in the atmosphere are pulled appart, at an atomic level, by the high electric fields generated between such conductors. The air can now conduct, just like a wire, but with a few side-effects like light and sound (thunder & lightning on a small scale). This effect is kept at bay, in high voltage circuitry, by insulating the conductors. The insulator may be visible, like the plastic coating on a wire, or invisible, like the air around us. Just as high voltages can break down air and allow it to conduct, plastic insulation also has its limitations. Just because it looks solid does not mean it is safe!

Start with two electrodes, with a high potential (voltage) between them, and bring them together slowly. Initially, when they are far apart, nothing happens but as the gap decreases there will come a point where the air no longer behaves as an insulator. SPARK! The distance at which this occurs is proportional to the voltage used, higher voltage means longer spark. This is OK for sparks but what of arcs?!

The picture below shows a Jacobs Ladder. The grey box at the base is a high voltage AC power supply (actually a neon sign transformer) and it is connected to a pair of copper wire electrodes. The solid wires emerge from the supply box widely space to avoid any sparks shorting between then. They then bend in towards one another until a gap of around 1/4 inch is reach, then gently spread out again, to finish approx 4 inches apart.

A spark cannot jump between the wires at the top because the intervening air behaves as an insulator but where the electrodes come within a 1/4" (approx figure only), the air insulator is not thick enough to withstand the electric field. Here you can get a spark!

You also get an arc! 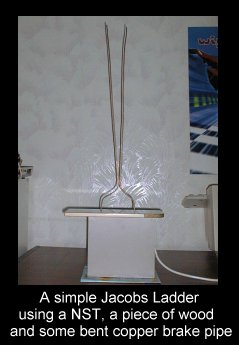 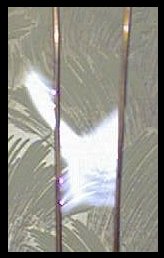 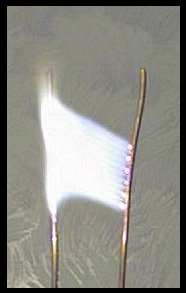 Here are three pictures of arcs. They range in length from 1 inch to 4 inches. Lots bigger than the initial spark length! The heat generated causes the arc to rise and the tapered electrodes stretch it out. The potential between the electrodes is about 10 thousand volts. The pictures show a band of arcs, not the real single arc, due to the camera exposure time but notice the banding effect, especially in the first picture; this is due to the power being 50Hz AC.

The length of an arc is determined by the power available to it. In the above examples the arcs were from a 1kW supply. The picture below shows sparks jumping a gap. The power level is much less. You can see multiple sparks jumping the gap but no sustained arc (the voltage is still the same). 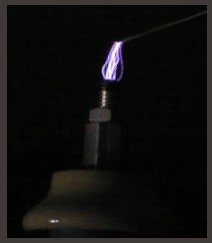 Think of the arc as a flame (it is just as hot and can easily start a fire!) and then think of a flame as a slow explosion. A relatively low power arc is pretty to look at but give an arc more power and you have a bomb! 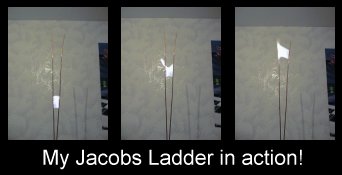